Tournament organizers announced on Tuesday that Djokovic had been granted a medical exemption — a decision which has provoked a backlash among Australians.

The 20-time grand slam champion reportedly traveled to Australia on a visa that does not permit medical exemptions for being unvaccinated, Australian news outlets reported.

Acting Victoria Sports Minister Jaala Pulford confirmed in a tweet on Wednesday that the government would not support Djokovic’s visa application.

Both The Age and The Sydney Morning Herald reported that Djokovic would likely be allowed off the plane and into Melbourne, however, the situation was still ongoing at midnight local time.

Neither Tennis Australia nor Djokovic’s team were immediately available for comment when contacted by CNN. 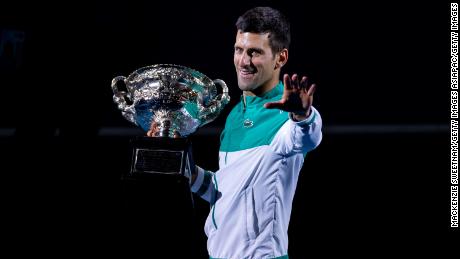 Australians have responded with anger and skepticism to the news that men’s tennis No. 1 has been granted an exemption to compete.

There had been uncertainty over Djokovic’s participation after players were told they would have to be fully vaccinated in order to participate or have a medical exemption granted by an independent panel of experts. The exemption from the vaccine mandate means he will defend his 2021 title in Melbourne.

Djokovic, who is tied with Roger Federer and Rafael Nadal on 20 grand slam singles titles, has not publicly revealed his vaccination status but voiced opposition to Covid-19 vaccines and vaccine mandates in April 2020.

“Personally, I am opposed to vaccination and I wouldn’t want to be forced by someone to take a vaccine in order to be able to travel,” he said in a
Facebook live chat, according to
Reuters.
But in May of last year, Djokovic said vaccination was a matter of personal choice: “I will keep the decision as to whether I’m going to get vaccinated or not to myself. It’s an intimate decision, and I don’t want to go into this game of pro and against vaccines, which the media is unfortunately creating these days.”

But the vaccine exemption has sparked backlash in Australia.

Deputy Victorian Liberal Leader David Southwick
called the decision to allow Djokovic to take part in this year’s tournament “a disgrace,” describing it as a “kick in the guts to every Victorian” who endured months of lockdowns and suffered personal setbacks during the pandemic.

Calls for a boycott

One of Melbourne’s most famous former Australian Football League (AFL) stars Kevin Bartlett
tweeted that Australians had been “taken for fools.” While one of the city’s prominent emergency physicians and former president of the Australian Medical Association (AMA) Stephen Parnis,
said the decision sent “an appalling message” to the public.

Across Melbourne, one of the world’s most locked-down cities in 2021, tennis fans took to social media posting calls for an Australian Open “boycott.”

The CEO of Tennis Australia, Craig Tiley, defended the impartiality of the medical exemption review process on Wednesday, telling reporters during a press conference that “no one knew who the applicant was.”

“There were 26 applicants through the process — there’s a handful which were provided with an exemption and that information only gets disclosed by those individuals on the grounds of which they were provided an exemption,” Tiley said.

“The process has been very clear and we completely understand and empathize with, first of all, some people being upset about the fact that Novak has come in because of his statements in the past around vaccination,” he said. 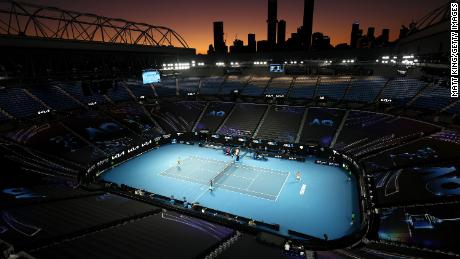 “However, it’s ultimately up to him to discuss with the public his condition if he chooses to do that and the reason why he received his exemption.”

“The process is incredibly robust. It’s de-identified and we are where we are, and so the tennis can begin,” she said, according to Reuters.

Djokovic’s exemption comes two weeks after Russian tennis player
Nata Vikhlyantseva revealed she would be unable to travel to the tournament because her vaccine is not recognized by local health authorities.

The Sputnik V is not on the list of vaccines currently approved by the Australian government, leaving world No.195 Vikhlyantseva ineligible to play.

Under the Australian Technical Advisory Group on Immunisation’s (ATAGI) current guidelines, a medical exemption is granted to individuals who have an “acute major medical condition (e.g. undergoing major surgery or hospital admission for a serious illness.”

The other remaining grounds for a medical exemption concern people who have suffered a “serious adverse event attributed to a previous dose of a Covid-19 vaccine, without another cause identified” and a vaccinee who “is a risk to themselves or others during the vaccination process,” due to an “underlying developmental or mental health disorder.”

Lastly, exemptions may be given to anyone with a “PCR-confirmed SARS-CoV-2 infection, where vaccination can be deferred until six months,” and in cases where individuals have received “anti-SARS-CoV-2 monoclonal antibody or convalescent plasma therapy.”

In June 2020, Djokovic tested positive for coronavirus following an exhibition event he organized in Croatia, but since then there have been no reports of him being re-infected with the virus.

On Tuesday, Djokovic posted a picture of himself at an airport with a caption stating he was “heading Down Under.”

“Happy New Year, everybody! Wishing you all health, love, and happiness in every present moment and may you feel love & respect towards all beings on this wonderful planet,” he wrote on Instagram.

“I’ve spent fantastic quality time with my loved ones over the break and today I’m heading Down Under with an exemption permission. Let’s go 2022.”

Six-time grand slam champion and Djokovic’s former coach Boris Becker says the Serbian is not intending to break any laws and should have personal choice over taking the vaccine.

“I think it would be in his best interests to openly speak about it […] and maybe let everyone in a little bit about what he went through to get this special exemption. I think it will help his cause,” Becker told CNN Sport’s Amanda Davies.

When asked about how players will respond to Djokovic’s exemption, Becker added: “The difference will be nothing from before because he’s been beating most of these players he’s been seeing in the locker room, so he’s not the most popular guy but for various different reasons.”

The Australian Open is the first grand slam of the year and is set to run from January 17-30.