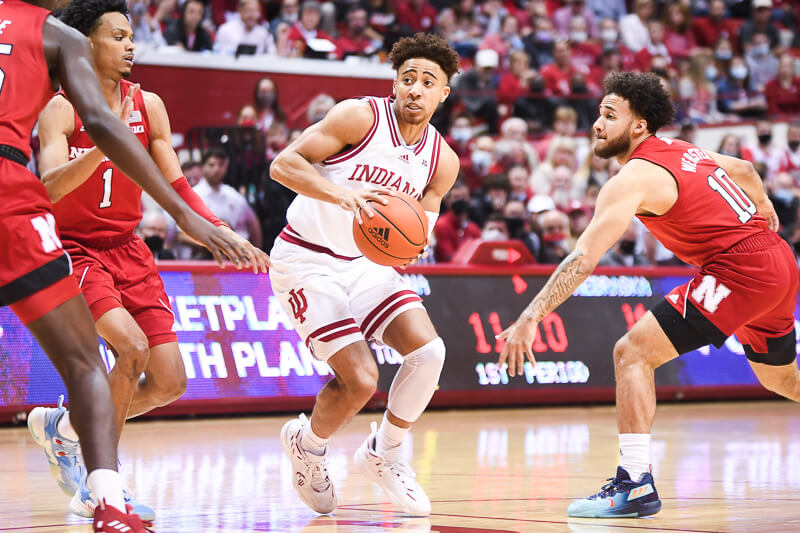 Quick thoughts on a 68-55 win over Nebraska:

How it happened: It was an ugly performance to start for Indiana in its Big Ten opener. The Hoosiers fell behind 9-2 early and trailed by 10 points at the 13:26 mark of the first half. Mike Woodson, perhaps sending a message to his starters, went to the bench to look for a spark. And he got it. The IU bench scored 18 of the team’s 26 points in the first half as the Hoosiers went into the locker room leading 26-22. Tamar Bates had 11 of those 18 points. Indiana built a 15-point lead by the 9:13 mark of the second half, but Nebraska closed to within seven at 53-46 with six minutes to play on a C.J. Wilcher 3-pointer. Indiana responded with six straight points to push the lead back to 10 at the 4:53 mark. That surge was enough to put the game out of reach as the Hoosiers won their seventh game in what was a subpar performance overall.

Standout performer: Race Thompson turned in a solid effort with 11 points and 11 rebounds in 30 minutes. Thompson didn’t commit a turnover after committing seven in Tuesday’s loss at Syracuse.

Statistics that stands out: Indiana’s had a solid shooting day from the free throw line and from behind the 3-point arc. The Hoosiers were 14-of-17 from the stripe (82.4 percent) and 8-of-22 on 3-pointers (36.4 percent). After committing 11 first half turnovers, Indiana committed just four turnovers in the second half.