The Braves have re-signed free agent outfielder Eddie Rosario to a two-year, $18MM contract with a club option for the 2024 season, the team announced. Rosario will earn $9MM in each of the next two seasons. The Braves didn’t announce the value of the 2024 option, but The Athletic’s Ken Rosenthal reports that it’s also at $9MM, with no buyout. Rosario is represented by Roc Nation Sports. 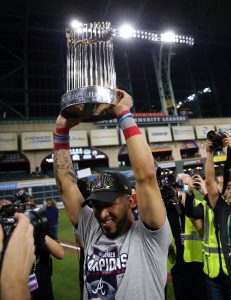 Rosario, 30, landed with the Braves in a midseason salary dump after a generally unproductive start to the season in Cleveland. The longtime Twins left fielder had signed a one-year, $8MM there after being non-tendered by Minnesota but hit just .254/.296/.389 in 306 plate appearances before landing on the injured list due to an abdominal strain. The Braves acquired Rosario knowing he’d need some additional time to mend, but it’s doubtful even their most bullish projections could’ve foreseen what laid ahead.

Activated from the 10-day IL on Aug. 27, Rosario exploded with a .271/.330/.573 showing in 96 plate appearances down the stretch in Atlanta. He seven home runs, four doubles and a pair of triples during that hot streak — and that production alone would’ve made the acquisition well worth it. Rosario, however, carried that production into the postseason — at least for the National League Championship Series.

After a mostly nondescript three games in the NLDS, Rosario again stole the spotlight with a blistering 14-for-25 effort that included three home runs, a double, a triple and nine runs driven in. Following that showing, Rosario’s crowning as NLCS MVP was a foregone conclusion. His production dried up during the World Series (5-for-22), but Rosario’s overall production with the Braves and those postseason heroics resulted in a solid payday and what figures to be an everyday role in Atlanta.

The up-and-down nature of Rosario’s 2021 season wasn’t exactly anomalous in nature. He’s been prone to torrid hot streaks and pronounced cold streaks throughout his big league career, thanks in part to a hyperaggressive approach at the plate. Rosario has strong bat-to-ball skills, evidenced by a strikeout rate of just 14.7% across the past three seasons. However, he’s also walked in fewer than five percent of his big league plate appearances, and over the past three seasons he has the game’s 13th-highest swing percentage (55.8%) and 11th-highest chase percentage (43%). Rosario excels at making contact even on those pitches off the plate, but in chasing so frequently, he gives up some opportunities to capitalize on his above-average power by driving better pitches.

Defensively, Rosario is more of a mixed bag. He’s played all over the outfield but is best suited in the corners, where he has ample arm strength that led to some gaudy assist totals, particularly early in his tenure with the Twins. Defensive metrics have soured on his work in recent seasons, but there’s an immense gulf between the most bullish and most bearish measures of evaluation. Defensive Runs Saved, for instance, credits Rosario with a +2 mark in 2021 — but Statcast’s Outs Above Average grades him at -17, which is the worst mark among all Major League outfielders. Year-to-year looks at defensive metrics can offer great fluctuation, but taken in larger samples, each of DRS, UZR and OAA give him negative grades dating back to 2017.

None of that’s to say Rosario is a poor investment for the Braves, particularly at these terms. His approach at the plate has worked for him, as evidenced by a solid .275/.309/.473 batting line (105 wRC+) and 133 home runs through 3242 career plate appearances. He’s posted single-season home run totals of 27 (2017) and 32 (2019) in the past, so he has the potential to be a prominent source of power in the Braves’ lineup over the next couple seasons. His overall offensive production is curbed a bit by the frequent swings and lack of walks, but Rosario has been a generally above-average hitter who’ll pair with Adam Duvall, Marcell Ozuna and, once healthy, Ronald Acuna Jr. in what should be a productive outfield/designated hitter carousel in Atlanta.