Liverpool’s FA Cup hero Alisson: Much more than ‘the best goalkeeper in the world’ – The Athletic

Alisson dropped to his knees and pointed to the heavens.

His anticipation, athleticism and lightning reflexes as he sprung to his left to expertly keep out Mason Mount’s penalty in sudden death had put Liverpool on the brink of ending their 16-year wait for FA Cup final glory.

When Kostas Tsimikas held his nerve from 12 yards out moments later and set off on his manic victory dash around Wembley, team-mates and staff alike made a beeline for the Liverpool goalkeeper.

Joel Matip got there first, lifting him in the air like he was the trophy itself, before Alisson was mobbed. Jurgen Klopp’s delirious dash across the turf ended in his No 1’s welcoming arms. As red smoke bombs rained down from the stands, the Brazilian’s name was chanted repeatedly by the jubilant travelling Kop.

“For me, he’s the best keeper in the world and he proved it again,” captain Jordan Henderson tells The Athletic.

“It’s not only this season, ever since he came to the club he’s been incredible. That was a world-class save in the penalty shootout after a couple of very good ones in normal time. He makes such a big difference to this team.” 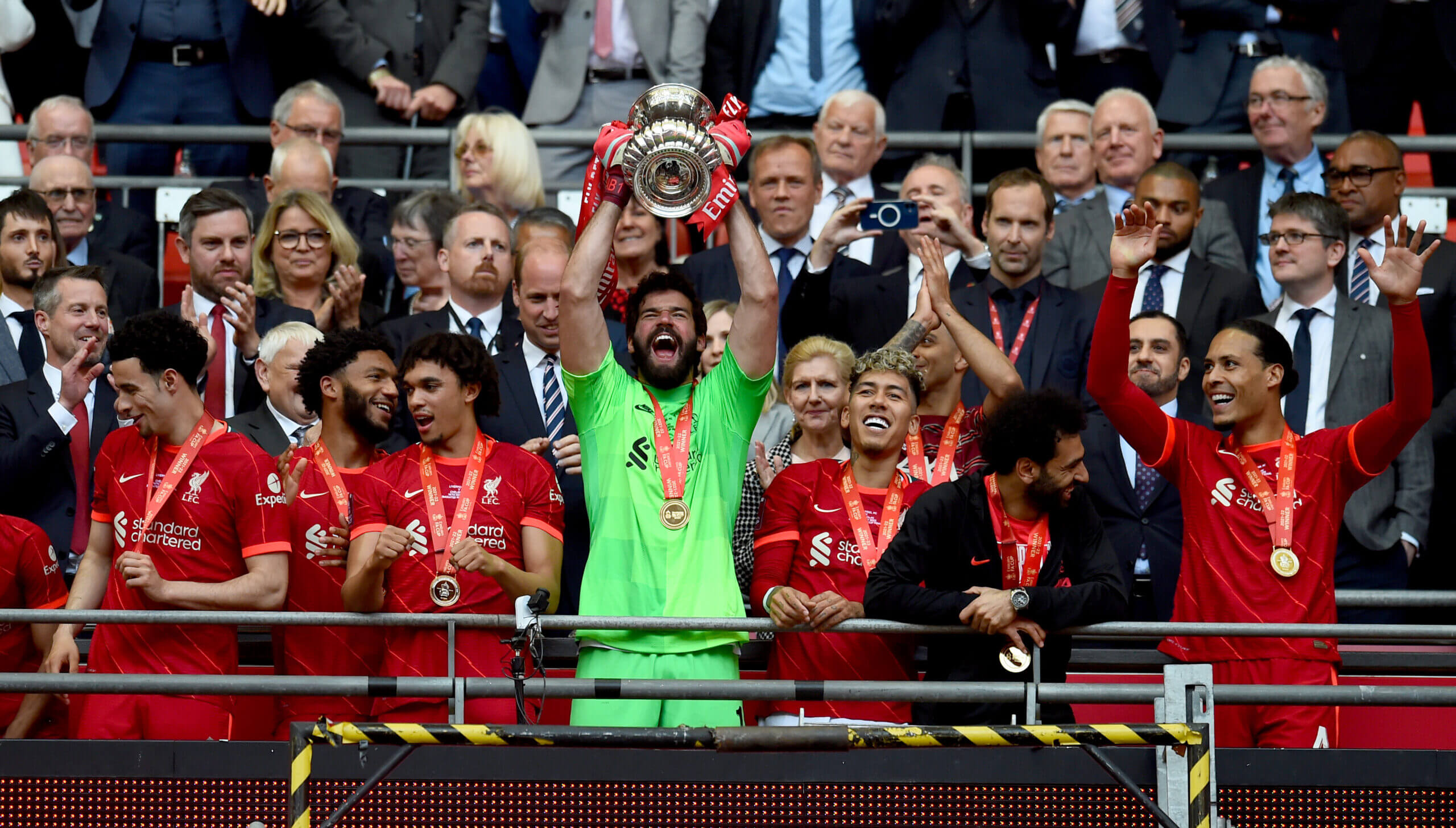 There have been so many factors behind Liverpool’s thrilling pursuit of silverware on all fronts this season. So many match-winners in the deepest squad the club has ever assembled.

Yet Alisson has been as influential as anyone. He’s the rock at the base of Klopp’s red machine. His consistency has been staggering. It was a travesty he wasn’t shortlisted for the PFA Player of the Year award.

He’s kept 28 clean sheets across 51 games in all competitions and there have been so many big saves at pivotal times. Twice in normal time on Saturday he came to the rescue as Marcos Alonso and then Christian Pulisic were thwarted. He was brave and agile in equal measure.

He’s such a commanding presence and his distribution with the ball at his feet repeatedly helps to launch attacks. His audacious pass with the outside of his right boot started the move which should have ended with the electric Luis Diaz breaking the deadlock.

“All the credit to Ali. He saved us,” smiled Sadio Mane, who was the most relieved man inside Wembley. He had the chance to settle it but saw his penalty kept out by fellow countryman Edouard Mendy after Cesar Azpilicueta’s miss had handed Liverpool the initiative.

Alisson made a point of hand delivering the ball to each of Liverpool’s takers as they walked up to prevent Mendy from playing mind games to put them off.

What was an area of glaring weakness when Liverpool last faced Real Madrid in a Champions League final four years ago, will be one of immense strength when they embark on their revenge mission in Paris on May 28.

It was on the back of Loris Karius’ meltdown in Kyiv that the club’s owners sanctioned the £65 million signing of Alisson in the summer of 2018. Long-serving goalkeeping coach John Achterberg convinced Klopp he would be the “game changer” Liverpool needed and his judgement proved to be spot on.

“I knew Ali was good but he’s surprised everyone with just how good he is,” says Achterberg. “He’s driven, he works hard, he stays calm under pressure and he makes good decisions. That’s combined with unbelievable power, speed and reflexes.”

There would be no showpiece finale in Paris but for the brilliance of Alisson, who stood firm during that alarming opening 45 minutes of the second leg of the semi-final against Villarreal.

In fact how different the past 12 months may have looked but for the most famous contribution of Alisson’s Liverpool career.

It’s a year ago on Monday since he emphatically headed home Trent Alexander-Arnold’s corner five minutes into stoppage time to secure a dramatic victory over West Bromwich Albion at The Hawthorns.

Liverpool had been seconds away from a demoralising draw against relegated opponents. It looked like they were heading for the Europa League until Alisson became the first goalkeeper to score a competitive goal in the club’s history. No one would have believed then that they would scale such heights this time around.

“That moment just sums this group up,” adds Henderson. “We always keep fighting right to the end. We had so many injuries at that moment. It was a hard season for us but we kept going and Ali came up with something special.

“To end up qualifying for the Champions League was a big achievement with everything we faced last season. Now we’ve got a Champions League final to look forward to. Ali has certainly played a massive part.”

That iconic goal against West Brom was dedicated to his father Jose, who had tragically drowned in Brazil three months earlier. The pandemic had denied him the opportunity to return home to mourn with his family.

His strong Christian faith and the love and support of his wife Natalia and everyone at Liverpool helped him through the toughest of times.

It’s a mark of the respect he commands in the dressing room that before the start of this season he was voted on to the captains’ group by his team-mates. He has blossomed into a real leader. His words carry gravitas. The club acted on his glowing recommendation to add Brazilian legend Claudio Taffarel to the backroom staff earlier this season to complement the work of Achterberg and Jack Robinson. 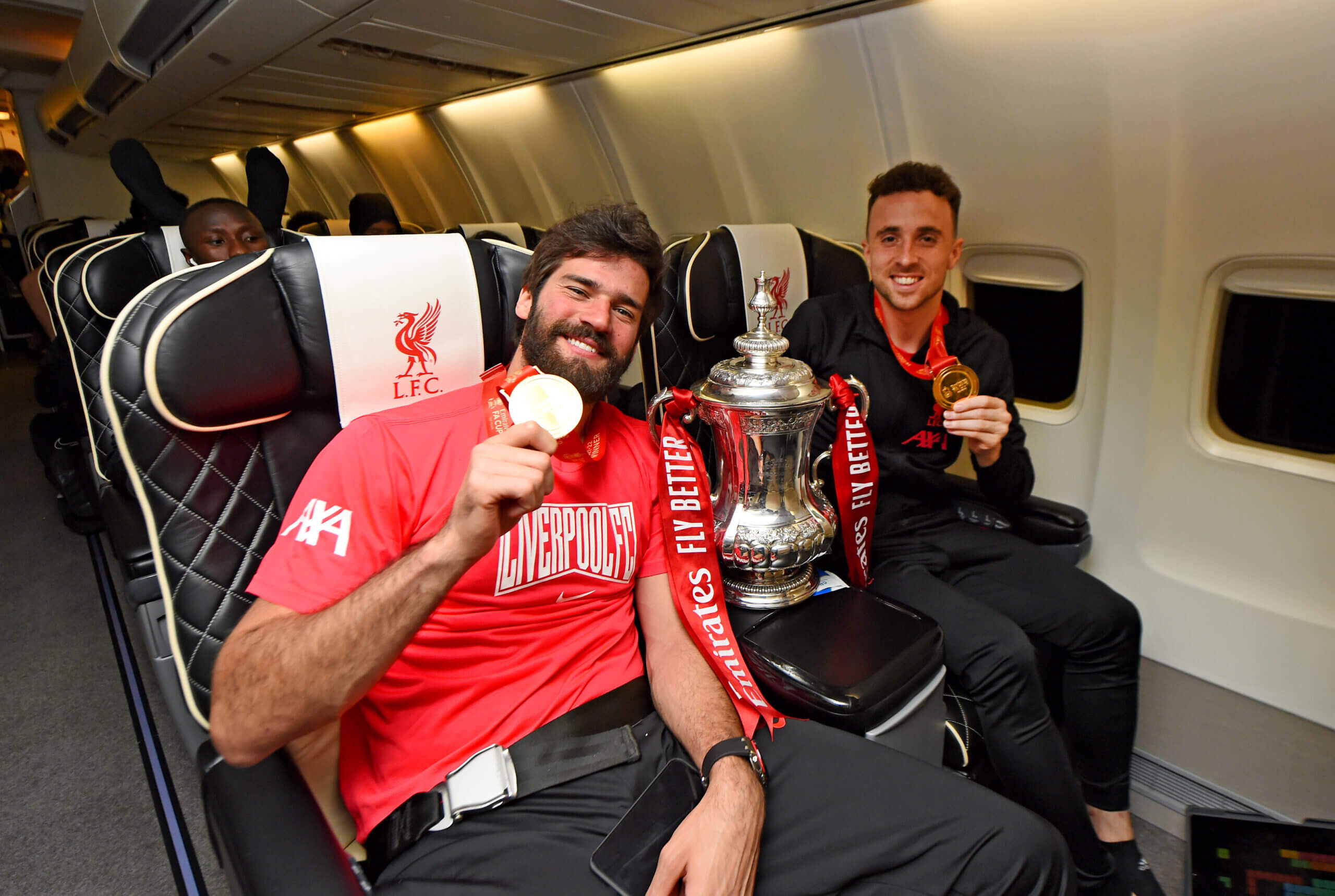 Alisson and Diogo Jota on board a flight back to Liverpool after winning the FA Cup (Photo: Andrew Powell/Liverpool FC via Getty Images)

When Klopp told Alisson in February that Caoimhin Kelleher would start the Carabao Cup final against Chelsea ahead of him having appeared in the earlier rounds, his response was “great, that means he can get himself on the keepers’ mural at the training ground by helping us to win a trophy”. The young Irishman duly did with his heroics in the shootout.

Remarkably, across the Super Cup, Carabao Cup and FA Cup, Liverpool have now won three penalty shootouts against Chelsea during Klopp’s reign with three different keepers after Adrian did the business in Istanbul.

Alisson, who has kept clean sheets in the finals of the Champions League, the Club World Cup and the FA Cup, was typically humble as he attempted to divert praise elsewhere. “I couldn’t do the saves without the help of the team,” he said. “All the goalkeeper coaches helped me with the decisions I made. I only did that save (from Mount’s penalty) because we deserved it.“

The truth is Alisson pulled it off because he’s a master of his craft.

Liverpool, who completed a domestic cup double for the first time since 2001, march on with Mohamed Salah and Virgil van Dijk both easing fears they could be fitness doubts for Paris after early exits at Wembley.

“It means the world to me to captain this team,” says Henderson, who became the first Liverpool skipper to lift six different trophies.

“We’ve had a lot of games in a short space of time and you could see that a lot of the lads are struggling with little niggles. But getting our hands on the FA Cup after such a long period without winning it will give us the perfect boost for these next two weeks. Three games to go, three big pushes required.”

Having Alisson in the form of his life will fuel the belief that the best of this season is still to come.