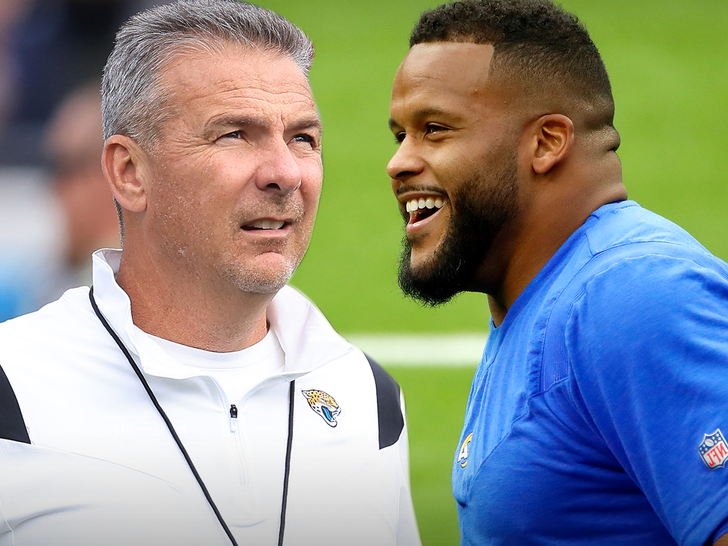 Urban Meyer allegedly did not know who Aaron Donald — arguably the best player in the NFL — was while he was the head coach of the Jacksonville Jaguars.

According to The Athletic, multiple sources who worked with Meyer during the 2021 season claimed the head coach was unfamiliar with Donald and other NFL stars like Deebo Samuel and Jamal Adams.

In fact, one source, the outlet reported, said Meyer actually asked one staffer at some point during the year, “Who’s this 99 guy on the Rams?”

“I’m hearing he might be a problem for us.”

Of course, Donald is a future Hall of Famer, a 7-time All-Pro and a 3-time Defensive Player of the Year. He’s played on the league’s biggest stage — the Super Bowl — 2 times in his 8-year career.

It only took until the Jaguars second offensive play of the game for Aaron Donald to do this. I’m sure Urban Meyer knew who he was then. https://t.co/higOkVRGjT pic.twitter.com/4OXlR37tXD

Donald and the Rams ended up playing the Jaguars just days before Meyer was fired in December — and AD recorded a sack and a forced fumble in the contest.

Meyer’s attorney, according to The Athletic, declined to comment on the allegations in the story.

As we previously reported, Meyer was officially canned by the Jags on Dec. 15, after former Jaguar Josh Lambo accused the coach of kicking and bullying him at practices and meetings before the season.