Providence looks to silence the doubters with Sweet 16 win over Kansas: We took that to heart – Fox News

The Providence Friars are back in the Sweet 16 for this first time since 1997, but for senior Ed Croswell, it’s business as usual.

Croswell, 22, told Fox News Digital in an interview following Thursday’s team practice in Chicago that Providence has been building up momentum all season long to prove the naysayers wrong, and that continues on Friday night when they take on the top-seeded Jayhawks.

“I feel like everything we do, we’re just making history, and we’re bringing back old memories for Providence fans,” Croswell said. “It’s a great opportunity for us to make our name and make our impact on the program forever.” 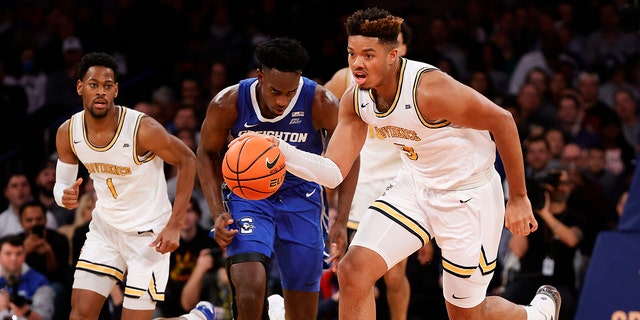 Ed Croswell of the Providence Friars gets a steal in the second half of the game against the Creighton Bluejays during the 2022 Big East Tournament at Madison Square Garden on March 11, 2022, in New York City.
(Tim Nwachukwu/Getty Images)

The Friars went 25-7 this season, including 14 Big East conference wins. They were certainly the underdogs heading into the NCAA Tournament, but after winning their first regular-season championship in Big East history, head coach Ed Cooley is drowning out the noise.

“The narrative on doubt and luck and this and that, yeah, it plays on you,” Cooley told reporters this week. “The players will come in the locker room and talk about it, and I tongue-in-cheek it a little bit, but, you know, you got some older guys out there just willing to try to compete for respect. I don’t have to be liked, but I’ll be damned if you’re not going to respect me.”

Croswell is certainly one of those players.

“When we focus on what we have to do, we can make amazing things happen,” he told Fox News Digital of the Friars’ unlikely run. 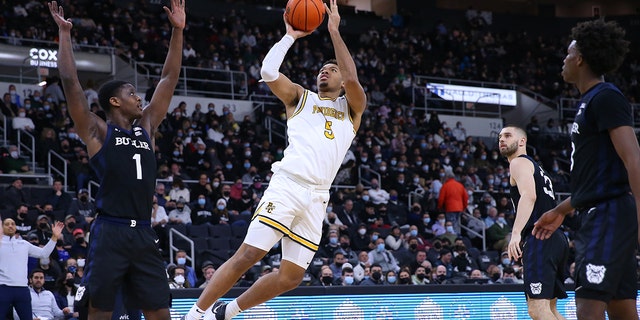 “The fact that everybody doubted us to be where we are right now. We came this season being ranked the seventh seed in our conference. They didn’t expect us to come this far – being in the Sweet 16 and winning our conference championship. They didn’t expect our team to be this good. I think we’ve beaten the odds, and we earn our respect every game.

“He challenges us every day to stay focused and just take it game by game,” Croswell said of Cooley. “Earlier in the year, our goals were to win as many games as possible before we get to conference play, and then in conference play, don’t lose more than three games. Then we got into the [Big East] tournament, we tried to win some games – we dropped some games, and then we came back stronger. But he just keeps us focused and makes sure we stay on the right path.”

Friday night’s game against the Jayhawks will be the Friars’ biggest test so far. Kansas (30-6) has won seven straight since a 74-64 loss at TCU on March 1, advancing to the Sweet 16 for the first time since 2018. It is tied with Kentucky for most wins in NCAA Division I history with 2,353.

“We have to stay focused,” Croswell said of the matchup. “We have to be good at transition defense, and then we also have to come out and play our toughness and our brand of basketball. I think we’re as good as anyone in the country when we do that.” 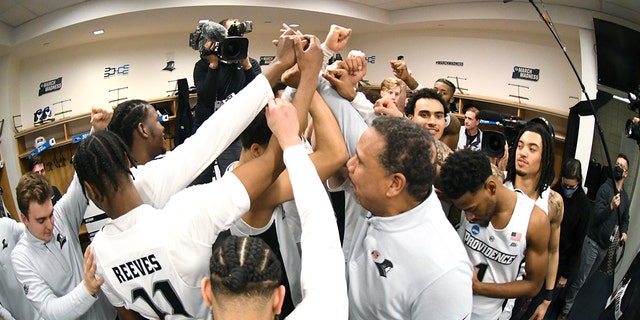 The Providence Friars celebrate winning the second-round game of the 2022 NCAA Men’s Basketball Tournament against the Richmond Spiders at KeyBank Center on March 19, 2022, in Buffalo, New York.
(Mitchell Layton/Getty Images)

A close look at the teams shows an advantage for the Jayhawks.

Providence is just one game away from reaching the Elite 8, but just a year ago, this seemed like only a dream for the 13-13 team. So what changed? 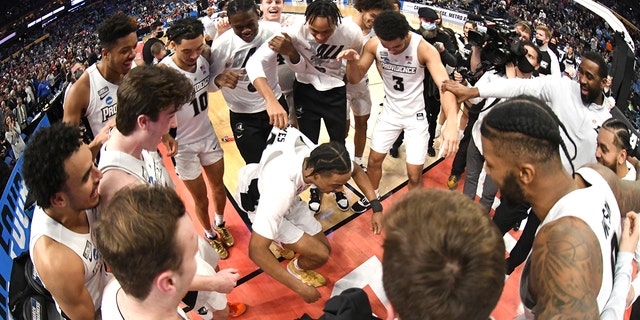 The Providence Friars celebrate winning the second-round game of the 2022 NCAA Men’s Basketball Tournament against the Richmond Spiders at KeyBank Center on March 19, 2022, in Buffalo, New York.
(Mitchell Layton/Getty Images)